“Emo Murmurs” is the newest entry into the Marshmallow Fruited Sour series for us, and it’s kind of okay…or whatever…but you’ve probably never heard of this series or anything. We know you well enough to know you’ll never love this copy, anyway, but here we go.

We took the normal base for our Fruited Sours and nearly doubled it to 8.2% ABV, so this one is Imperial, which totally makes it cooler. We then conditioned it on a very angry amount of Peach, Prickly Pear, Red Currant, Vanilla, and Marshmallow. We never grew out of this feeling that we won’t grow up and stop making these fruity-mallow suds, so here we are.

We experience a whole mess of angst, some fingerless gloves and eyeliner, the feeling of your first pair of JNCO jeans being donated to Good Will cuz you only wear skinny jeans now (OKAY, MOM?!), and squishy Marshmallow-covered Sweet Tarts dipped in sticky Peach puree.

You might say it’s the savior of the broken, the beaten, and the damned styles of beer 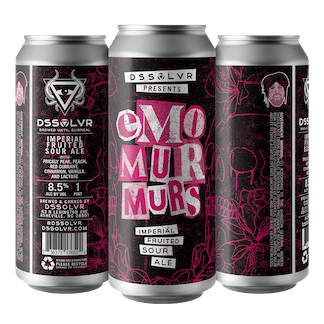