One of the first beers we brewed was a Hefe with our pals Resident Culture. Sadly, that first batch had some fermentation issues, but later got re-brewed and released as “It’s Not Even Speltz Right”, a Hefe with Spelt rather than Wheat.

HOWEVER, rather than dumping that first batch, we racked it into a puncheon with our House Culture, along with Resident Culture’s! And, thus, “Speltz Wrong” was born. It sat for over 14 months before being packaged. Naturally conditioned in the bottle and keg for over 7 months with Walker Honey Wildflower Honey and our House Mixed Culture. So its…a Mixed Culture Puncheon Fermented Mixed Culture Hefespeltzen…yeah…we know.

Notes of explosively ripe Peaches that just mush in your hand, Sour Strawberry candies, Pineapple skins dipped in Lime juice, Mystery-flavor Airheads, and a bit of Clementine pith. Big and malty, but also very dry, very tart, and very funky. If you’re familiar with our latest Mixed Culture offerings and those of Resident Culture, you can really pick out both of our house culture’s character and that’s super rad. It’s worth the ridiculously long style determination! 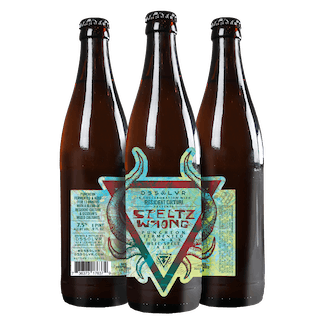