Up, Up, Down, Down, Left, Right, Left, Right, B, A. The code that holds the key to survival, just like our newest Smoothie-Style Dry-Hopped Fruited Sour Ale, “One Punch Defeat”, that we whipped up with our lovable pals @NewOriginBrewing.

We met the New Origin crew before they even opened, when they came in one day to chat us up about their plans to open their brewery. We’ve been following along throughout their construction and subsequent opening, and the time seemed ripe to host them for a collab!

Mashed with Riverbend Malt 2-Row and a whole mess of Wheat and Oats, fermented atop a mess of Apricot, dry-hopped with Mosaic Cryo, and then conditioned on Kiwi, Peach, Guava, and Passionfruit. It is big and thicc and fruity and hoppy and delicious, and tastes like a gigantic tropical bowl of fruit drowned in IPA. It’s a One Punch Defeat to your senses, if you know what I’m sayin’.

Keep it cold, drink it fresh, defeat your enemies, save the world, blah blah blah. 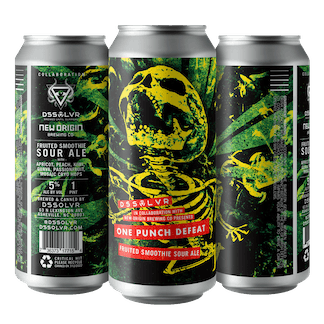