We’ve been embracing our inner dessert freaks for a while now, and the folks at Ology Brewing are some kindred spirits in that freakness. So we decided to collab and push a series we’ve been working on into the stratosphere.

“Fill Thy Sticky Bun Hole” is a Maple Pecan Cinnamon Bun Stout brewed with a base of Riverbend Malt Southern Select and a whole bevy of Specialty Malts, then dosed with a veritable SHITLOAD of Pecans, Maple Syrup, a special blend of Cinnamons, Marshmallow, Vanilla Beans, and Vanilla Cake. Big and sweet, but very well balanced, and at 8% it’s not gonna totally destroy you.

We experience absolutely slamming Pecan Pralines down your gullet, hanging in the mall with your buds and sipping on a Barney’s Pecan Coffee while stuffing a Cinnabon roll in your face, a couple Maple candies in the afternoon, and probably some Cinnamon French Toast cereal after an early Fall hike.

*THIS BEER CONTAINS NUTS! SO MANY NUTS!*

Over 20# of freshly roasted Pecans per barrel of beer. That’s a shitload of Pecans. 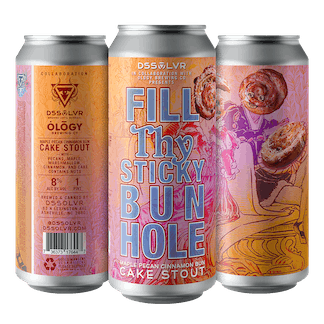