WE DID IT AGAIN, EAT THE RICH, BUT WITH S’MORES STUFF!

This time around, we used Heaven Hill barrels for some extra spice character in the final product. After primary fermentation in the barrels, we allowed the beer to rest for 2 months. We then fermented another batch in Stainless, but used Dutch Cocoa, Graham Crackers, and lil baby Marshmallows for that one. We then blended the finished beers into a brite and conditioned them further on Cacao Nibs and Husks, Madagascar Vanilla Beans, even more Marshmallows, and a touch of Cinnamon for a few weeks.

Huge marshmallow and chocolate notes on the nose, with a hint of cinnamon and sweetness. As your palette opens up, waves of chocolate, vanilla, and sticky marshmallow intertwine with threads of cinnamon, oak, and spice. The barrel character builds while enjoying and as the beer warms up a bit, but this is certainly a big, crazy, comfy treat. Who needs a tent? 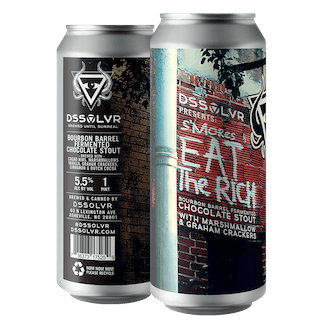