View cart “The Era is Now – Blended Wild Ale” has been added to your cart.

It’s Been Years  is a Tequila Barrel-aged Rye Mixed Culture Ale and is one of three siblings that all have very different characteristics, but share a family resemblance thanks toour proprietary microflora cultures. Some lean more toward brett funk, some push further into sour territory, all spent many moons on oak. Together, they represent the foundation of our thriving mixed fermentation program and serve as a great indication of the awesome things to come.

Our labels for these beers are a nod to the homes in which our progenitors, Vince Tursi and Mike Semenec, lived and brewed as the concept for DSSOLVR began to take root. If you’ve ever partied with Mike or Vince in the last decade, you’re highly likely to recognize these houses. It was only right that we acknowledge the places where the embryonic development of DSSOLVR began, and there’s no better way for us to do that than with three of the most special beers we’ve ever produced. 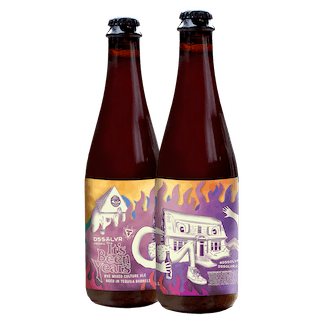