You all know that we love @atlantabrewingco, and after a few months of back-and-forth with them, we decided we needed to resurrect one of our first beers here. “Eye Superior Eye” is a Southern Hemisphere IPA w/ house-made Oat milk, made in collaboration with our sweet buds from ATL.

Clocking in at 8.8%, this bad little ditty does the trick. We took a couple things we’ve learned over the past few months, and really think this re-brew is a much cleaner and hop-forward example of what we originally intended it to be. We mashed with @riverbendmalt Barley, Rye, and Oats, and then hit with arguably too much house-made Oat milk in the Whirlpool before fermentation with a much cleaner yeast than the last batch. This was then hit with NZ Cascade, Wakatu, Nelson Sauvin, and Southern Cross for a tidal wave of hop character. Soft white Grape, Mango Kush, Grapefruit pith, and Pineapples just straight coated in that sticky-icky resin. Super smooth and juicy, with just enough bitterness to keep you coming back for more. HELL YEAH, DAWG! RIDE THIS WAVE! RIP INTO THESE CANS! WHOO! 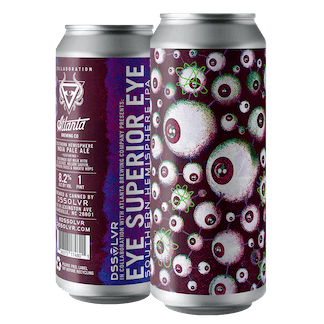